0
was successfully added to your cart.

Herald Leader Article: Proposed youth sports complex would be a boon for Lexington 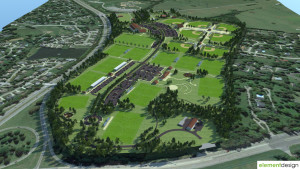 If Lexington moves forward with a proposed 130-acre youth sports complex for baseball, softball, soccer and other sports, it could generate as much as $23 million a year in revenue for Fayette County, a recently released economic impact study showed.

Over 20 years, that could be as much as $450 million spent at Lexington hotels, restaurants and other businesses, according to the Hunden Strategic Partners report.

The Bluegrass Sports Commission, a nonprofit that promotes and recruits new sports in Central Kentucky, recently released the study and announced it was pursuing a capital campaign to build the $25 million complex, which could host youth sports tournaments.

The study showed a sports complex would draw 7,000 teams a year and generate 50,000 hotel stays.

IT’S CERTAINLY A PROPOSAL WORTHY OF BRINGING TO THE COUNCIL. THEY (BLUEGRASS SPORTS COMMISSION) ARE GOING TO HAVE TO RAISE A SIGNIFICANT AMOUNT OF FUNDS.

The idea for a youth sports complex has been discussed for more than a decade. To jump-start those discussions, the commission announced in February 2015 that it would pay for an economic analysis to determine how much money and how many tournaments a multisport complex would generate. The cost of the study was split between the commission and VisitLex, the city’s tourism organization.

The commission has identified a proposed site between Versailles and Parkers Mill roads. The site is owned by the city, is outside New Circle Road and is adjacent to Cardinal Run South, a city-owned baseball field. Although the designs aren’t final, the site has room for more than 20 sports fields.

“This could be a true economic driver for our city,” said Brian Miller, president and CEO of the commission. “Sports tourism is a $7 billion business. Even during the recession, people did not stop spending money on their kids.”

The commission has committed to a seven-figure private capital campaign to pay for part of the cost to build the complex. It will also ask the city for $18 million for the project.

Phil Holoubek, a commission board member who has spearheaded efforts to build the youth sports complex, said he understands there is much on the city’s to-do and to-fund list. But nearby communities are weighing similar sports complexes because they have proven to be successful in cities such as Elizabethtown. Unlike other capital projects, there will be an almost-immediate return on the city’s investment, the Hunden study shows.

“This will give the city an immediate return on investment of $23 million a year,” Holoubek said.

Lexington hotels have a difficult time staying full from April to October. A sports complex that would host different types of tournaments, including baseball, softball, soccer and football, could keep hotel rooms full from spring until late fall, Miller said.

A STUDY SHOWED A SPORTS COMPLEX WOULD GENERATE DRAW 7,000 TEAMS A YEAR AND GENERATE 50,000 HOTEL STAYS.

Holoubek said the fields would not just be for tournament play. The commission already has spoken to Fayette County schools about using the fields during the week for practice.

“My kids played youth soccer,” Holoubek said. “A lot of times you end up playing in fields with holes and bumps. I think it’s time for Lexington kids to get the same opportunities to play on great fields that kids in other cities do.”

Holoubek said initial plans for the complex also would include walking and biking trails that would connect to the trail system that runs through Beaumont. That would be a benefit for the neighborhood and people who are trying to get to the sports fields from hotels in the Beaumont Centre area, he said.

The group has formed an advisory board consisting of representatives from various youth sports leagues, Commerce Lexington and elected officials to head the capital campaign.

Miller and Holoubek said they have spoken with many members of the Urban County Council but plan to present the findings of the economic analysis at a council meeting within the next several weeks so the council can consider the proposal before discussions begin on the budget. Mayor Jim Gray typically unveils his budget proposal in April. The council has until June 30 to pass a budget for the fiscal year that begins July 1.

“We are excited about the opportunities,” he said. “It’s certainly a proposal worthy of bringing to the council. They (Bluegrass Sports Commission) are going to have to raise a significant amount of funds.”

Miller and Holoubek said the goal is to raise several million dollars, but a specific fundraising goal has not been set.

Many in the sports community say a youth sports complex has long been needed in Lexington.

Kris Zander, executive director of Kentucky Youth Soccer, said Lexington doesn’t have enough fields to host tournaments or even for all soccer teams and clubs to practice on.

“There is also a lack of training space or fields,” Zander said. “We have clubs scrambling to rent space from a church or any open green space.”

Zander said one of Kentucky Youth Soccer’s tournaments draws 100 to 150 teams. “But you have to limit the number of teams you can accept based on the number of fields you have,” Zander said.

University of Kentucky Athletics Director Mitch Barnhart is also a supporter of the project.

“A new youth sports complex would provide additional recreational opportunities for the people of Lexington and could attract numerous special events that bring thousands of visitors here,” he said. “As a boost for the area economy, it would also bring guests to the University of Kentucky campus and help us display the exciting things that are taking place here.”

Representatives of the Wellesley Heights neighborhood association, which borders the property, could not be reached for comment.

Carin Lovell, president of Colony Neighborhood Association, said no one from the commission or the city has spoken to the neighborhood about the proposal. The Colony is across New Circle from the potential site.

Lovell said she supports the concept. But traffic on Parkers Mill Road is an ongoing concern for all neighborhoods bordering Parkers Mill.

“Parkers Mill is already overtaxed,” Lovell said. “People use it as way to avoid Harrodsburg Road. But if this is a way to finally get improvements to Parkers Mill Road, then more people would be for it.”

Holoubek said the designs are preliminary, but the main entrance probably would be off Versailles Road. Another entrance would be on Parkers Mill.